UPDATE (via Onward State): Dado found dead in stairwell by Steidle and Deike. Foul play not suspected, however alcohol was involved.
—
A fire has been lit underneath Penn State and the entire community is mobilizing to search for a freshman who went missing this weekend. Joseph Dado was last seen on Sunday the 19th at 3:00 AM leaving the Fiji house on campus (Phi Gamma Delta). It’s one of the few fraternities at Penn State who still has a house that resides on the actual campus.

My first indication that something was going on was when I was heading to the far west of campus this afternoon to get a flu shot. Overhead, the whole time, a State Police helicopter was slowly flying around. It’s not totally abnormal for a helicopter to fly around Penn State, but usually it’s either for a football game, or to take photos of campus. As a freshman I got to fly in a helicopter flown by the Air Force for their ROTC recruiting efforts. (It was awesome, I nearly signed up.)

But later on, when cutting through the HUB to grab a drink, I realized this was no ordinary flyby. Inside the HUB were dozens of students with fliers showing a missing student. His photo was plastered around the building, and there was an article in the campus newspaper.

Onward State, a Penn State blog, has been updating all day. They’ve linked to a fast growing Facebook group, and noted that students and community members, led by the Interfraternity Council and the University Park Undergraduate Association, will be meeting tonight to organize search parties. The family has also put up a $10,000 reward for information.

it’s kinda scary, because there is a history of people going missing around here, such as Cindy Song and DA Ray Gricar, not to mention the legendary unsolved murder of Betsy Aardsma. I think everybody is hoping this was just some drunken misunderstanding and not as serious as it is fast becoming. 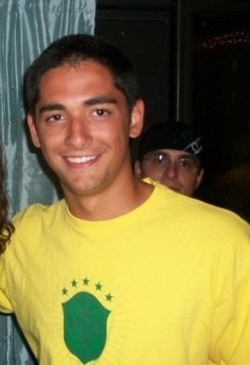