the more i listen to taylor, despite not being a huge fan of any country music with few exceptions, i find her and her songs to be ridiculously charming.

I signed up for last.fm a few weeks back when they started the Xbox 360 preview program with the last.fm integration (friend me!). It’s pretty sweet as an internet radio thing, but after hooking it up with my local library I realized I’m embarrassingly obsessed with Breathe Carolina. Trying to deduce how this happened, I have come to the conclusion that a combination of catchy songs, very short songs (only one song on their first album is over 4 minutes), and the fact they’re on my ipod nano which i rarely change the music on, means that this band is ranked number one with a vengeance on my playlist. So now I have to listen to any band other than them to get them off first place. 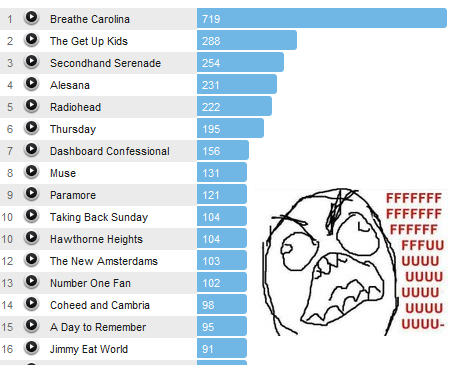