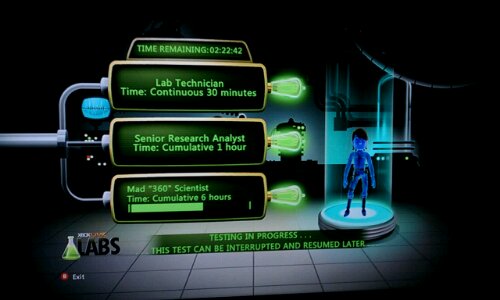 For the last 3.5+ hours my Xbox has been running the Xbox Live Labs network test. It supposedly gives an avatar award once you complete each test.  I’ve completed the first two, just have to let it run the last test a total of six hours…

It’s kinda shitty but if it leads to a better Live experience I’m down.

In case you haven’t heard, SquareEnix is working on a follow up to, in my opinion, the greatest video game ever made, Final Fantasy IV. The After Years is a Wiiware title, but it was originally released in Japan as a cell phone game. I’m curious about this game, as it does contain most of the same characters that the original had.

According to Siliconera this Wii release will feature 4 player multiplayer support. Perhaps this will finally give me a reason to dust off my Wii!

My 360 has come back from the dead!  Well, it wasn’t technically “dead” when I packed it up in a coffin and mailed it back to Microsoft.  But it was certainly screaming in pain whenever it had a disk in it.  The noise was rediculous.

I finally broke down and had it fixed and I must say, the new drive is much quieter.  I discovered that Xbox 360 games do, in fact, have an audio track!  It took 14 days from when I dropped it off at UPS until the fixed Xbox arrived.  Plus they tagged on a month of Xbox Live.  Not bad.

So while I think it’s shitty that I had to drop $100 to fix a stupid problem like this, I am happy to have a working system again.

After putting up with the unbearable buzzing the DVD-ROM drive in my 360 produced whenever it spun a disc for probably a year, I finally caved and sent it in for service. They were pretty fast about sending me the coffin to mail it in.. and I’m hopeful that they’ll fix her up and have it back soon. So, I dropped it off at UPS today, Monday.. We’ll have to see how long until it’s back to me.