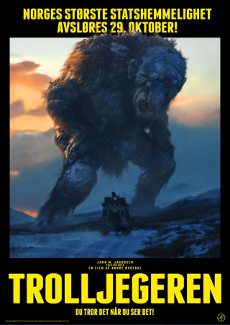 Troll Hunter is awesome.  It’s from Norway, and should really be watched in the original language if possible.  My girlfriend got me this on Blu-ray for my birthday and the English dub is just silly.

It’s a movie format I love: Found Footage.  Basically in all of these movies you follow a film crew around as they actually do the filming of the movie.  In Troll Hunter there’s a camera man, a sound girl and the interviewer, and they follow around a grizzled old Troll Hunter as he tries to kill various trolls that are wandering around the Norwegian countryside.

The setting for this movie is breathtaking and it’s all the better in HD.  I really want to visit Norway on vacation someday now.

The trolls are really well done too.  Sure they kinda look silly, but considering this didn’t have a huge Hollywood budget I was impressed.  There’s a good sense of danger too, as you don’t even see the trolls until far along into the movie.

This is a film, like most successful non-English films, that some studio snatches up the rights for a remake, and of course an English version is in the works.  But the original has a lot of charm and is definitely worth checking out!