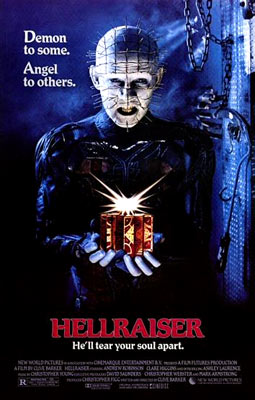 For the first movie of the inaugural Spook Fest we watched Hellraiser.  I’m trying to pick out some films that I somehow have never seen, and this series is one of them.  When it was new, back in 1987, I was entirely too much of a wimp to watch anything remotely scary (I was like 6!), so I went into this movie not knowing a thing about it other than that it has Pinhead as the main villain.

Well it turns out even that isn’t entirely true, but in any case, Hellraiser turned out to be quite a fun movie.  If you too haven’t managed to see this before, basically it’s about a guy who accidentally summoned some demons by opening a puzzle box, and his attempt to return to Earth after  being torn apart in hell for a few years.  Returning to Earth though means he needs to suck the blood out of various innocent people, and needs a whole pile of victims.

The plot is sort of dumb, and I found myself early on rooting for the demons.  But where this movie really shines is the special effects, which are good even today (and must have been tremendous at the time they were new).  Instead of loads of CGI filling every scene like you’d see in a movie today, back in 1987 they had to use puppets, costumes, latex and lots of fake blood and gore.  It made for a messy, slimey, goopy, gorefest, but was a lot of fun to watch.

The demons (I guess technically they are Cenobites) have some interesting looks, such as Chatterer (who I call the Teeth Dude) who is seriously gonna suffer from dry mouth: 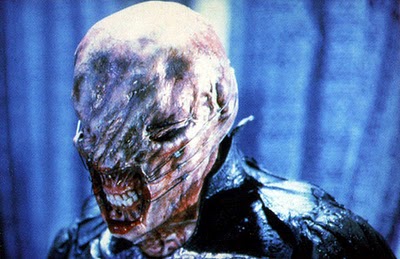 or Butterball who looks a lot like Cee-Lo Green.

Wikipedia says they are making a reboot of Hellraiser, and I can only assume that long gone will be the special effects that made the original great, to be replaced with CG.  I’ll stick with the classic!