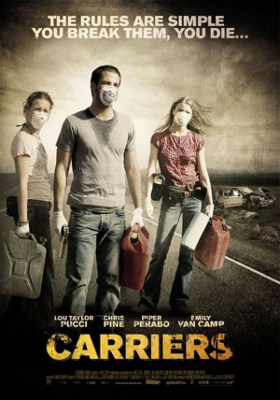 I know that by randomly picking movies off Netflix to watch for Spook Fest 2011 I’m going to run across some real stinkers.  I had never heard of Carriers but I figured it would be a pretty bad low-budget thing.

Surprisingly, this movie that nobody ever heard of and nobody ever saw was actually pretty respectable.  It’s got some famous people in it too…  I mean, it’s got mofo’ing James Tiberius Kirk for starters.  This is the closest any movie has gotten to achieving my 3 minutes old dream of having Star Fleet fight a planet of zombies.

But actually there are no zombies in this movie.  It’s just a disease that’s spread through contact with sick people.  Which clearly would wipe out the entire human race.  I mean, it’s not like people infected with a disease that’s transmitted this way would be immediately quarantined from the general population.  I like these post-apocalyptic tales though so it gets a pass.  All that’s left are a few bands of survivors who must scrounge for any supplies they can from each other.  And by scrounge I mean take by extreme force.

It’s also got Elliot from Law & Order SVU, but there’s nary a murdered prostitute in sight.  He gets to be the overprotective father of an infected child.  I guess you can’t blame the guy for being protective but I think sometimes Christopher Meloni is just a bit too intense.

And so you get to see the small band of survivors take advantage of this guy and his sick daughter, but of course the kid  is going to cough on one of them and make them regret ever crossing their path.  Of course.  Captain Kirk should have known from his days fighting Klingons:

So not only do they get to deal with this disease, they end up driving their stolen car directly into another movie, 28 Days Later, where they run into the crazy military types who want to kill the guys and have their way with the group’s women.  I mean, it’s literally the exact same idea. 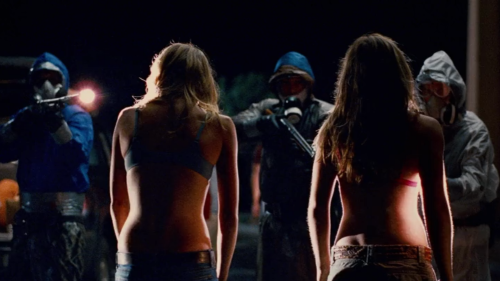 Sure, at first they’re all concerned that OH NOES, THEY HAS TEH GERMS, DON’T TOUCH ME…. and then like 3 seconds later their penises kick in and are like “dude, I don’t even care, we need to hit that.” 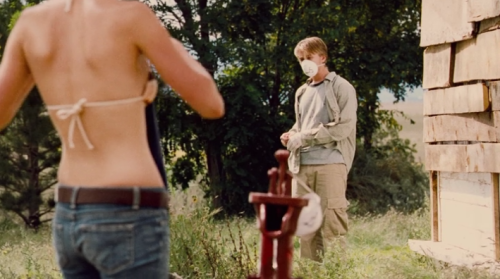 While this actual disease isn’t all that interesting (it basically gives you a rash and you cough. oh and i guess you die)… the movie does do a good job of making you care about the characters.  I honestly think Chris Pine was awesome in this movie, playing the tough older brother who tries to stay positive on the surface but in reality the conflict and horror of what he’s seen and done is ever present.

Despite being a movie I’d never heard about and just randomly picked on Netflix, I was pretty impressed with Carriers, and you should check it out.  Just don’t let any sick children touch you on the way to the couch.