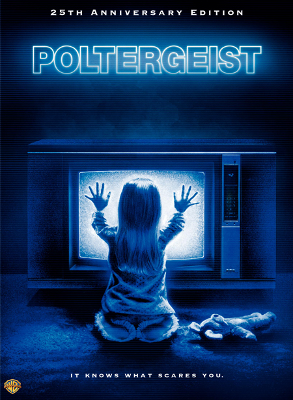 I can believe I have never seen Poltergeist before.  It was my girlfriend’s turn to pick the movie for Spook Fest and it was a 3 way tie including Poltergeist and a couple other movies that weren’t immediately available on Netflix.  I had seen a few scenes from this movie before, namely the thing with the kitchen chairs, but I pretty much had no idea what it was really about.  After Penn State got killed against Alabama this past Saturday, I decided I was done watching football for the day, and it was time to put on Poltergeist.

For those who are likewise uninitiated, it’s got the guy from Coach and his family, and his adorable little daughter starts seeing ghosts and gets sucked into the house.

Despite being a fairly old film, the effects for the most part hold up well.  The one that particularly fails though is the melting face of one of the paranormal investigators, which just looks silly… although I’m not so sure I’d like to see that scene given a modern realistic CGI treatment.

The movie really had it’s share of over the top moments that had me laughing too.  The psychic, Tangina, is this tiny old lady (Zelda Rubenstein) who I’ve seen in a million other movies… it turns out this was her second movie ever.  She had a few lines that cracked me up, especially when she strikes a pose and declares the house “clean”.

So what made the house all evil?  Oh I dunno, maybe the ANCIENT BURIAL GROUND they built it on?  I don’t really understand how the entire housing development could have been built without the construction crew having bumped into a casket or something.  I mean, isn’t there a house on the block that actually has a basement?

Poltergeist was pretty awesome though, and I can understand why it’s a horror staple.