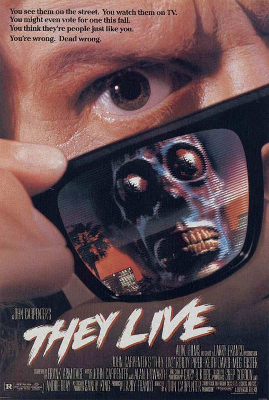 Despite being made in the 80’s, John Carpenter’s They Live could easily be a commentary on the modern day recession.  And wow, what a fun movie!  It’s got Rowdy Roddy Piper, Keith David, aliens, one of the most epic fight scenes in any movie, and probably the greatest one-liner ever.

This movie really does have everything, and it’s about as campy as it gets.  Rowdy Roddy Piper is a drifter who finds a construction job to try to make ends meet.  Until he gets back on his feet, he is staying at this little shanty town with other homeless people.  Nearby is a church that he gets curious about, and little does he know, it’s full of an armed resistance movement.  What are they resisting?

Well it turns out, the entire planet is being run by aliens who are disguised as humans.  They broadcast a signal that tricks people into not realizing what the aliens actually look like, and so they are able to go around in public without being noticed.  On top of that, the aliens are behind a huge propaganda campaign that leaves subliminal messages in basically anything printed.

The resistance movement has constructed sunglasses that allow people to see the truth.  And the truth looks like this.

Roddy Piper enlists the help of his friend, Keith David.  Although for some reason Keith David is really pissed at Roddy Piper.  I really didn’t understand how their conflict escalated like it did.  But before you know it, they’re kicking each other’s asses gloriously.  I had no idea this is where the fight on South Park between Timmy and Jimmy originated, but it’s literally a mirror image, shot for shot, of the They Live fight!

Everything is pretty much over the top here, such as when the chick with crazy white eyes tosses Roddy out a 3rd story window, or when he busts into a bank with a shotgun and says “I have come here to chew bubblegum and kick ass…and I’m all out of bubblegum.”  But They Live also has a deeper meaning, trying to tell us to be aware of the commercialism and how much control it has over us.  This movie could easily be remade in 2011 and have just as much of an impact.  This is easily my favorite movie of Spook Fest 2011 so far.

They Live on Amazon

| They Live on Netflix