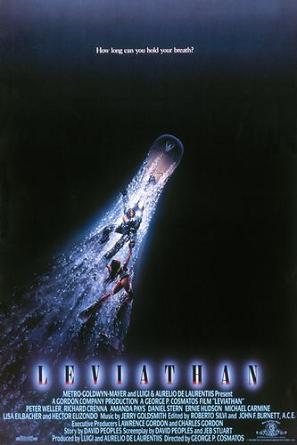 I watched this whole movie waiting for that scene with the 80’s CG water to touch the guy.  Yeah, wrong effing movie Scott.  That of course was The Abyss which I also haven’t seen.  But what I did see was a pretty lame movie called Leviathan that was not even about a big sea monster leviathan (which could have been cool) but instead was about a virus or something that they caught from a shipwreck, and that ship was named Leviathan.  Considering like 2 minutes of the movie took place on that ship I would have picked a different name.

So basically what happens is the guy who plays Robocop is underwater in a base where they’re mining, and the company is run by the chick with the crazy white eyes from They Live, and one of the bumbling unprofessional miners (because every movie about people who work in some remote isolated environment immediately have to have somebody who acts completely unprofessional and reckless, right?) falls over an underwater cliff and finds his way into a shipwreck.  Somehow he catches a disease that turns him into a monster later on.  And it spreads to the crew and so on and so forth.

I felt like Leviathan has some promising moments, but overall I was unimpressed by the design of the monster, and I pretty much wanted it to eat most of the cast.