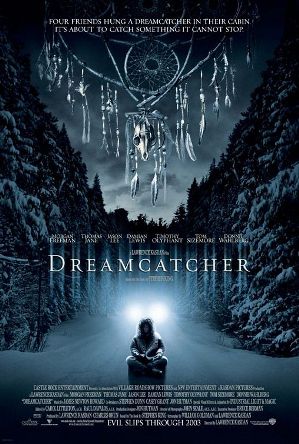 Dreamcatcher could have been awesome, and it had some really good build up.  But when you kill off your best character and then have a crazy space alien ending… well let’s just say mistakes were made.

It’s originally a Stephen King book, and from my expertise from reading the book(‘s wikipedia entry) I know that many things were changed for the movie.  Why do they do that?  I realize some cuts have to be made in the interest of time.  But Dreamcatcher basically changed the entire ending.  I think the thing post people would have a problem with in this movie is not the action, the CGI, the character design, or even the sorta fruity way they portray the “memory warehouse”, but that the ending was just over the top and unfulfilling.

Basically it’s like Stand By Me, but replace Corey Feldman with Jason Lee.  Oh and add a kid with mental problems (who seems to be a psychic).  Then fast forward 20 years and they’re going camping out in the wood to drink (although they didn’t invite Duddits their challenged friend) and of course it’s the forest from hell, where a huge alien fungus is spreading and killing everything.  The US military (led by Morgan Fucking Freeman) is there using too much aggression to deal with it.  And, everybody has super powers.

Oh and that mental disability kid?  When he grows up, he’s played by Marky Mark’s brother.  Yes, Donnie from New Kids on the Block.  No lies. 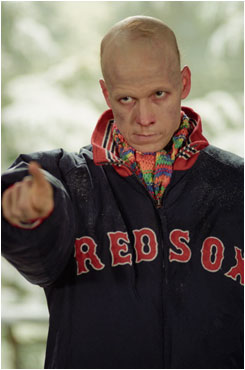 I liked the performances from most of the adult actors, but all the child actors had horrible lines and horrible delivery, and it was pretty cringe-worthy.  The CGI was solid, with some pretty toothy creature designs.  Let’s just say it’s a step up from the monsters in the Langoliers.

I guess I mostly liked Dreamcatcher but I think it needed another couple of passes over with the script, and they really should have considered keeping the ending from the book.  It wasn’t scary though, but I suppose had a pretty positive tone to it.  I guess what I’m trying to say is… I didn’t HATE it.