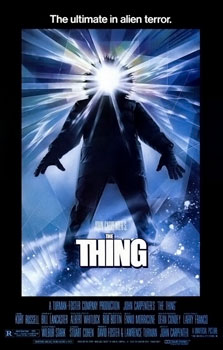 The theme for a lot of this year’s Spook Fest as you might have noticed is to watch as many classic films I hadn’t ever seen as possible, and The Thing is yet another of them.  The other motivation for this one is that the new version is in the works which is supposedly a prequel, so watching this one was a no brainer.

Another thing I’ve realized over the past few weeks is just how much I dig John Carpenter’s movies.  They’re not all exactly gems but I have really grown to enjoy his style.

So if you are also a “The Thing” novice, you may not know that it too is a remake of the 1951 film “The Thing from Another World“, with both films taking place in a frozen research facility (the older one in the Arctic and the other in Antarctica).

One team of researchers dug up a… Thing, which is able to shapeshift into other living beings.  It then infiltrates another research camp and, once people realize what it is capable of, the scientists all become paranoid that everyone else is actually a shapeshifted monster and not really who they say they are. 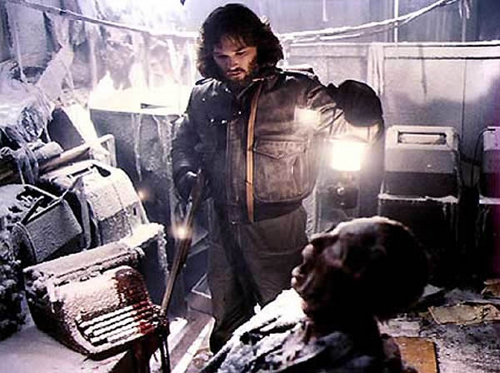 Being out in Antarctica in the winter (with a radio that doesn’t work of course) makes for a less than ideal environment to combat a shapeshifting killing machine, but it sure was fun to watch.  Overall I thought this movie was really well done, and I think the prequel-remake thing is going to be worth checking out.  Considering how nice and gory the 1982 special effects were, I can only imagine what they’ll look like this time around.